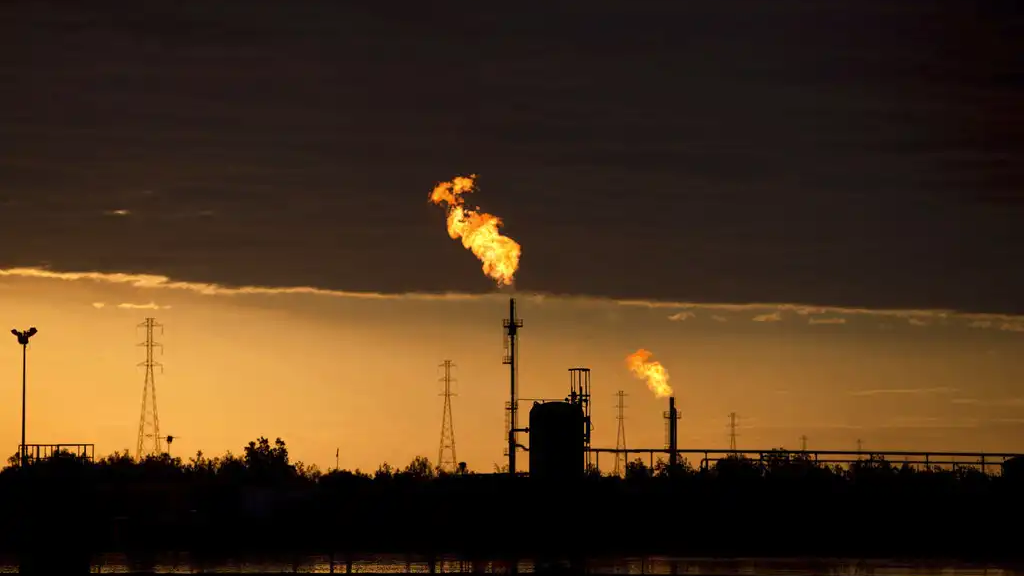 FILE- In this Feb. 18, 2015, file photo, flames burn at an oil complex near El Tigre, Venezuela.
(AP Photo/Fernando Llano, File)
The countries of the OPEC cartel agreed on Friday to pump 1 million barrels more crude oil per day, a move that should help contain the recent rise in global energy prices.

Questions remain, however, over the ability of some OPEC nations — Iran and Venezuela in particular — to increase production as they struggle with domestic turmoil and sanctions.

After a meeting in Vienna, Emirati Energy Minister Suhail al-Mazrouei said the cartel decided to fully comply with its existing production ceiling.

Because the group had been producing below that level, that means an increase in production of “a little bit less than 1 million barrels,” the Emirati minister said.

How that translates into effective production increases is uncertain, as some OPEC countries cannot easily ramp up production. Iran, for example, has been hit by U.S. sanctions that hinder its energy exports. Venezuela’s production has dropped amid domestic political instability.

Some analysts say that Friday’s deal could amount to an effective increase of just 600,000 barrels a day.

The price of oil jumped after the announcement, with the international benchmark, Brent, gaining $1.81 to $74.86 a barrel.

Al-Mazrouei noted that the decision “is challenging for those countries that are struggling with keeping their level of production.” However, he indicated that some countries could pick up production if others lag.

“We will deal with it collectively,” he said.

Analysts say that OPEC’s deal should contribute to lower oil prices in the longer term.

U.S. shale oil production could rise and American demand for energy could decrease this year, further squeezing the price of oil, which in May hit its highest level in over three years.

“Longer term, this is a bit of a win for consumers,” said Jamie Webster, director of Boston Consulting Group’s Center for Energy Impact. “More oil on the market means relatively lower prices for consumers.”

Friday’s decision means the Organization of the Petroleum Exporting Countries will observe the production level it agreed on in late 2016, when it cut output by 1.2 million barrels a day. In practice, its combined output was even less due to production problems. That has since then helped push up the price of oil by almost 50 percent.

While OPEC’s largest producer, Saudi Arabia, was open to higher production, Iran has been hesitant because sanctions imposed by U.S. President Donald Trump are making it difficult for the country to export its oil.

Trump has been calling publicly for the cartel to help lower prices by producing more. And after OPEC’s deal on Friday, Trump tweeted: “Hope OPEC will increase output substantially. Need to keep prices down!”

Some analysts note that while Trump has blamed OPEC, his policies have also helped increase the cost of oil by, for example, limiting exports from Iran.

Some analysts believe that Saudi Arabia needs a Brent price closer to $90 a barrel to cover its domestic spending but is feeling pressure from the United States to head off rising prices by boosting output. Russia may be happy to pump more oil and settle for prices in the $60s, according to Tamar Essner, chief energy analyst for Nasdaq.

There are other considerations than dollars and rubles.

Daniel Yergin, the vice chairman of research firm IHS Markit and author of several books on the energy industry, says geopolitical factors are a big element in the oil production talks.

Yergin said Saudi Arabia and the United Arab Emirates support the current, tougher U.S. policy toward Iran, Saudi Arabia’s rival for influence in the region. So they will want to support Trump’s call for higher production and lower prices. Iran will struggle to increase production, meaning it could lose market share and revenue to its rivals.

Consumers to pay more for gas and kerosene, less for diesel and LPG - Barbados